There’s no doubt that the sharing economy has revolutionized the way we live, work and get around. From services like Uber and Lyft to Airbnb and more, these new ways of doing business are steadily creeping into areas of our lives in surprising ways and disrupting generations-old ways of doing things. The ride-sharing business model, for example, has branched out to become competition for the trucking and logistics industries with startups like Cargomatic and Convoy. As cargo ride-sharing becomes more popular, the trucking industry is justifiably concerned about this threat to the traditional transportation and logistics business model.

But the growth of the sharing economy comes with concerns that workers can be exploited and non-professionals are being entrusted with critically important and dangerous jobs. As more non-professional drivers clog the roads with passengers and cargo, wrecks and injuries follow. Determining who’s ultimately responsible for property damage and injuries often hinges on a legal system that is struggling to keep up with technological advancements. Consider:

Companies like Uber typically try to keep liability for accidents at arm’s length by claiming that their drivers are “partners” rather than employees and arguing that accidents that occur while a driver is logged into the Uber app but between fares are not the company’s responsibility. A recent Texas law requires ride-sharing drivers to be covered by a policy that provides $50,000 for bodily injury and up to $100,000 per accident and to carry property damage coverage of at least $25,000. But that does not go far enough if it turns out that companies like Uber or Lyft are hiring incompetent drivers who cause serious injuries or worse or if ride-sharing apps are distracting drivers behind the wheel. 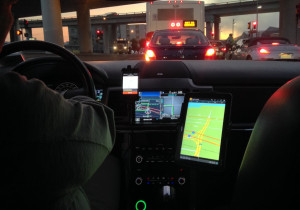 Consider the case of 6-year-old Sofia Liu, who was struck and killed by a sport utility vehicle belonging to an Uber driver in a San Francisco crosswalk on New Year’s Eve 2013. The driver was logged onto the UberX app at the time but hadn’t yet received any ride requests, according to the family’s lawsuit.

While Uber denied liability because its driver was between fares, the girl’s family contended that the Uber driver may have been distracted by the phone app he was using. The company settled the suit in July for an undisclosed amount.

This is a legal issue that is being worked through in real time. At Farrar & Ball, we conduct exhaustive investigations to identify all negligent parties responsible and work tirelessly to make sure they’re held accountable.