After two decades of steady declines in fatalities on U.S. roads, traffic deaths and injuries are entering a second year of alarming increases. The first half of 2016 witnessed a 9 percent jump in vehicle deaths in the United States, including an 11 percent increase on Texas roads and highways. That translates to more than 19,100 deaths in the U.S. and 1,824 in Texas during the first six months of the year – the largest percentage rise in 50 years, according to the National Safety Council.

At that pace, more than 40,000 individuals – more than 100 every single day – will die in car and truck crashes this year. Almost equally concerning, more than 2 million motor-vehicle crash injuries were reported so far this year. 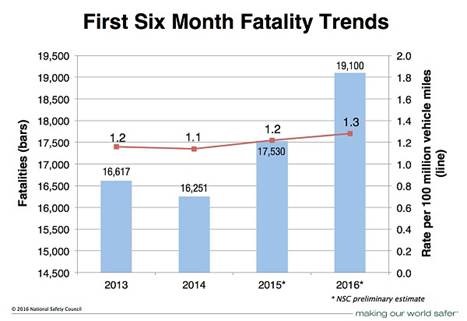 The exact cause of the increasing injury and mortality rate is unclear, although the NSC believes there’s a correlation between the falling price of oil and an improving economy, which has led to more vehicles on the road. Another factor: distracted driving. From teen drivers to professional truckers, cell phones and mobile devices more than ever compete for attention when drivers should be focusing on one thing – driving.

But for now, experts warn, the problem is likely to get worse before it gets better.

In Texas, the shale-drilling boom continues at full steam despite depressed oil prices. In rural counties in the Permian Basin region of West Texas and the Eagle Ford areas of South Texas, oil drilling operations are clogging rural highways and farm roads with trucks and heavy machinery that is often poorly maintained and with drivers who lack adequate rest and training. As a result, these areas have seen astronomical spikes in traffic fatalities and serious injuries.

When trucking companies cut corners on safety and training, the Farrar & Ball team has experience aggressively investigating the causes of motor vehicle crashes do determine what happened and why.